Don’t hold your breath, Airthinx wants to analyze the air we breathe

If you think the air outside is bad, wait to you see what wer’re sucking in indoors

The air has not always been my friend.

When I was 15, tiny allergens discovered my nose and lungs, making a nest and infecting me with a chronic runny nose, red eyes and borderline asthma. I learned a longtime ago that the great outdoors wasn’t so great for me and acclimated myself to indoor spaces, closed windows and central air. 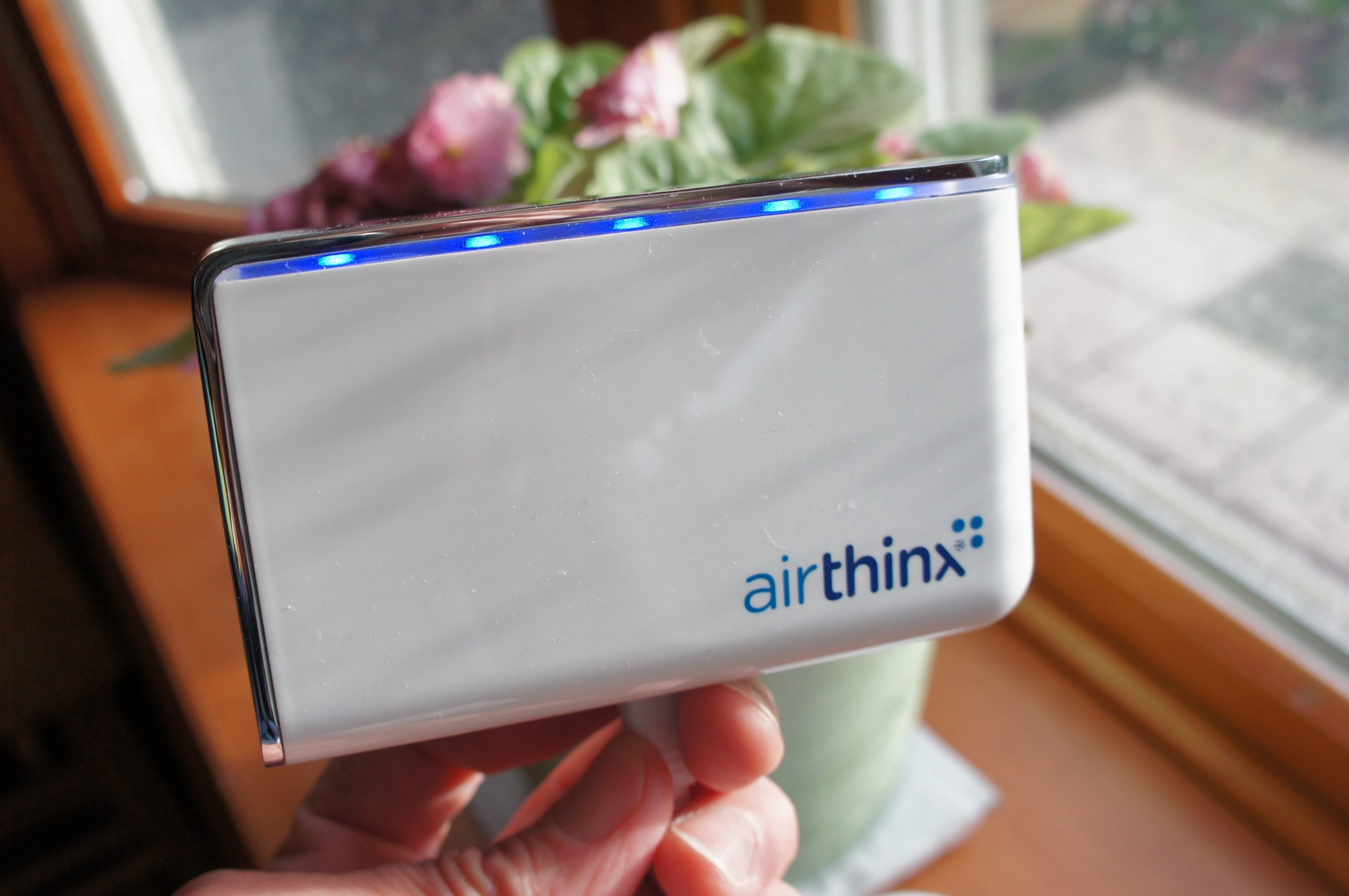 But what if my chosen climate and controlled atmosphere is also my gaseous enemy? Is the air I breath indoors free of dust, pollen, and even carcinogens? I mean, it should be, right? 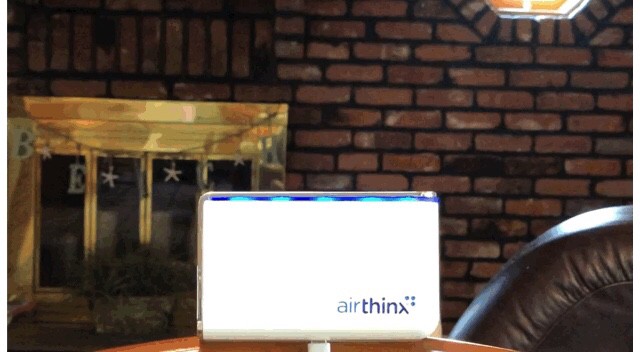 According to a 2016 study, the air quality indoors, where we spend 90% of our time can, thanks to smoke, invisible gasses, chemicals leaching into the air from appliances and our carpets, and mold and dust spore, be worse than the air we breathe outside (though I imagine this depends on where you live).

Great. Wonderful. What am I supposed to do, hold my breath when I’m in my house? If I take, on average, 23,000 breaths a day, how can I ensure that the max number of those are taken in safe-to-breath environments?

Before I get ahead of myself, though, I need to know if there is a problem with the air quality in my home.

A few months ago, I heard from Airthinx. They make a tiny home sensor box, also called Airthinx, capable of measuring nine different air-quality attributes, including Formaldehyde, Volatile Organic Compounds, Particulates, carbon dioxide, temperature, humidity and barometric pressure. All of them combine to tell you your overall air quality (AQ). While Airthinx didn’t know anything about my free-floating indoor atmosphere concerns, the company offered to let me try one out for a little while. 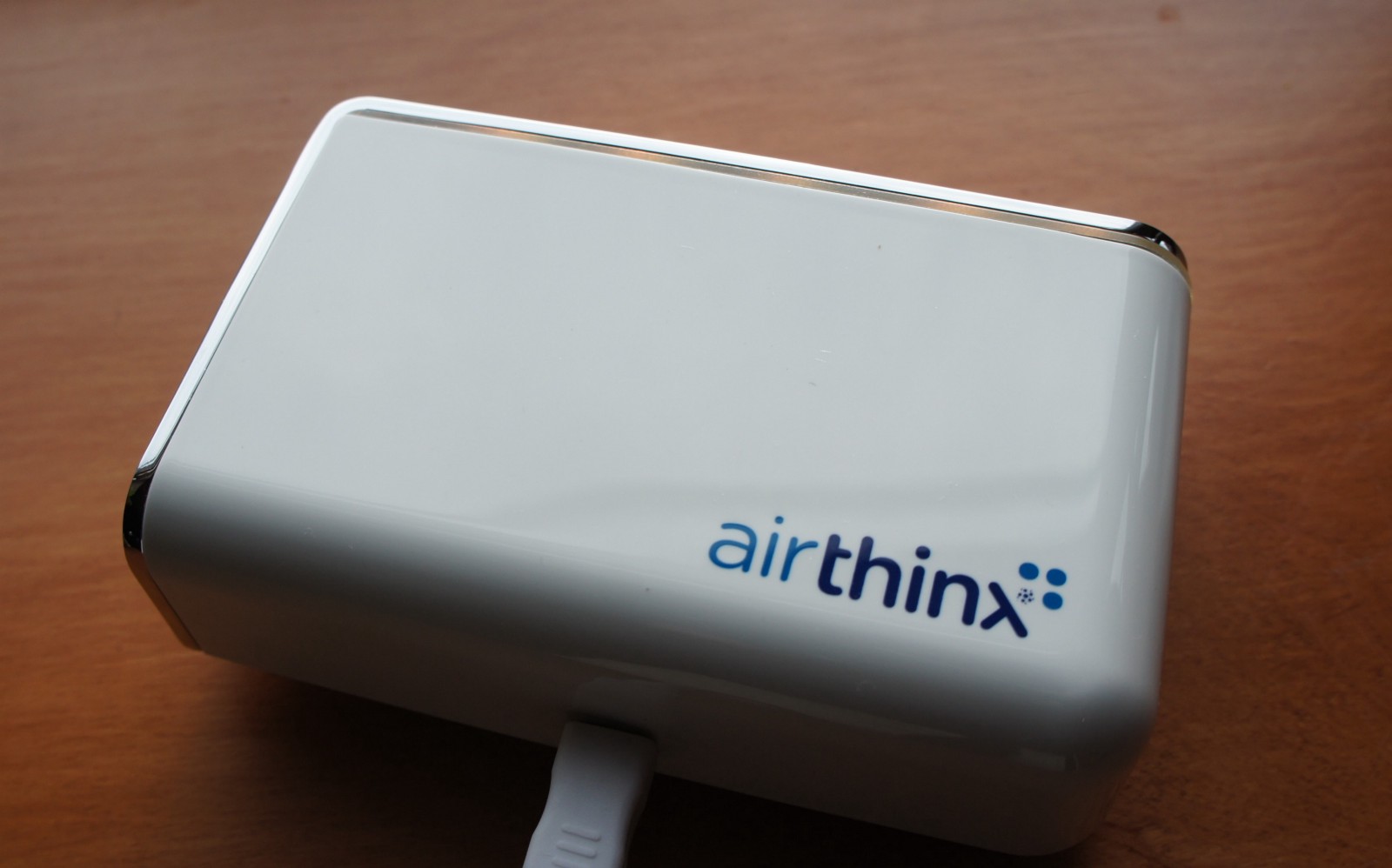 For all the sensors packed inside the roughly hand-sized device, Airthinx is an attractive, slightly inscrutable device. There’s no screen or buttons on the mostly plastic body. It has a single micro USB port for power (it ships with a plug and lengthy power cord). On the back is a removable square of plastic complete with two tiny levels and a pair of screw holes for use when attaching Airthinx to the wall.

Setup is relatively simple. You start by registering on the environet.io site. I don’t know why the site isn’t also called Airthinx and, yes, I agree that it’s a little confusing. 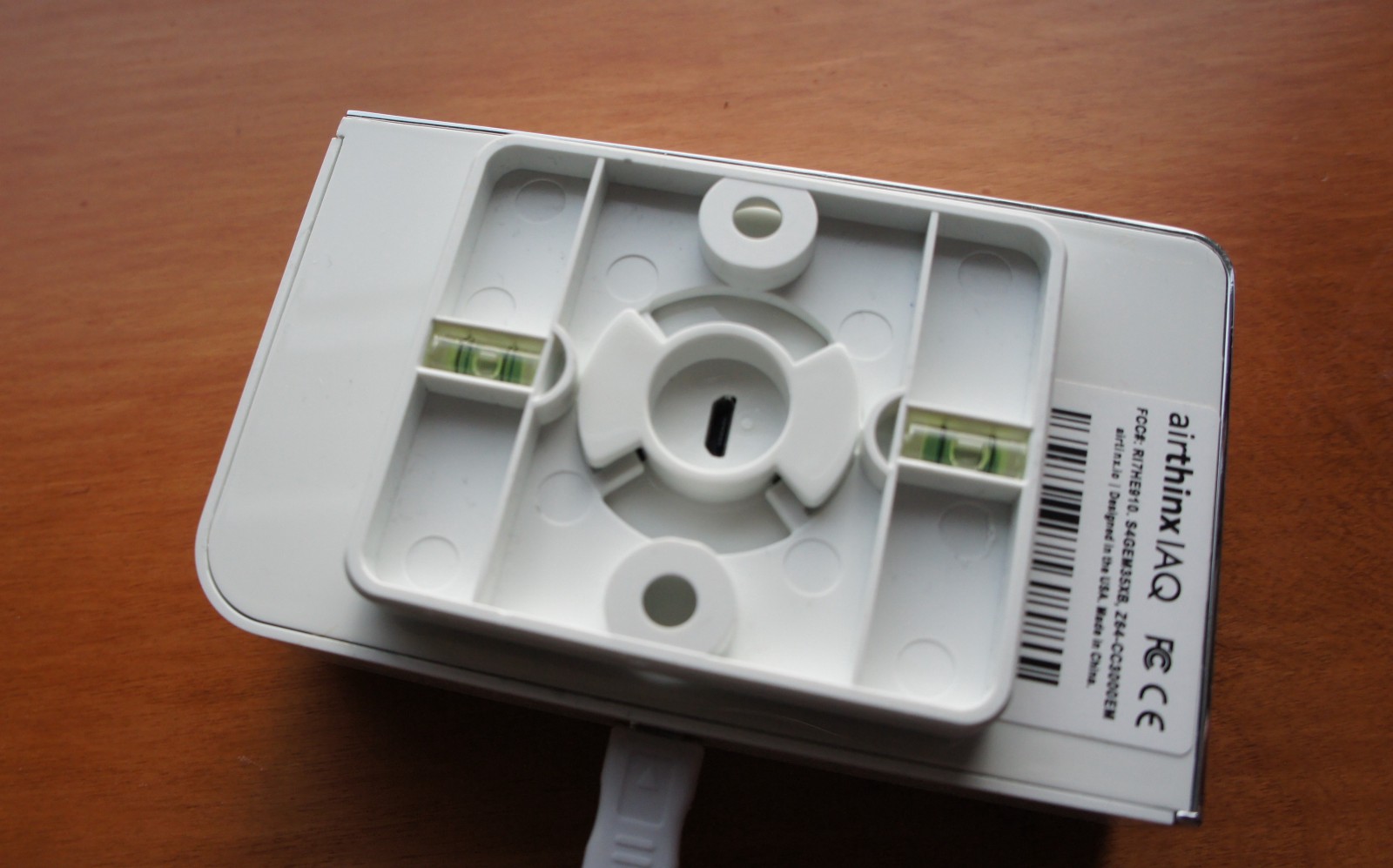 After this I plugged in the device, downloaded the free Airthinx app and logged in. Airthinx indicates it’s on with a thin band of LED lights that are orange when it’s offline and blue when it’s connected.

Because Airthinx comes with a built-in T-Mobile 3G cell radio, it’s online as soon as you plug it in. The air monitor is basically stuffed with as many radios as your typical smartphone. In addition to cell, it has Wi-Fi, Mesh network capability (so you can have a group of Airthinxs come up with a combined air quality reading for a whole office) Bluetooth, and even GPS.

My device came pre-registered to me, so the app automatically found it. When I checked it a few hours later, I had my first reading.

The news was not good.

The air I breathe

The App’s home screen shows an overall Air Quality Rating at the top. Green is good, orange is Moderate and red is Poor. I was staring at a red reading and wondering if I should get everyone out of my house ASAP. But why was my air quality poor?

As I looked at the eight metrics listed, searching for a culprit, I realized I wasn’t sure of what each measurement meant. I could see the reason for my poor AQ rating, a 69 out of 100, overall. That much was clear, but below that were labels and numbers that meant little-to-nothing to me. I had 1093 ppm, 0.075 mg/m2 CH2O, and 2 ug/m to the 3rd. I wondered if I should call a scientist for help. 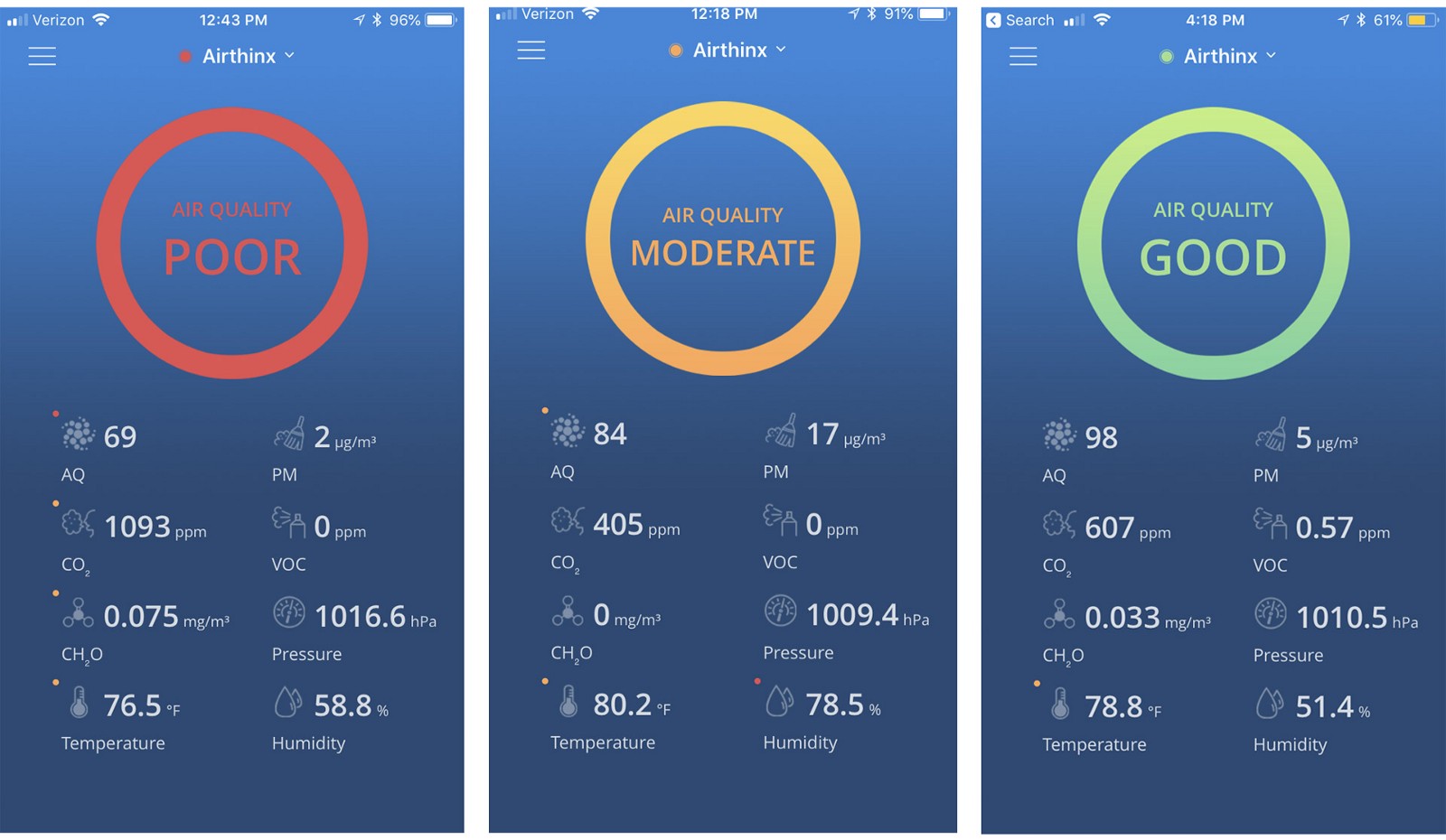 Next to some readings were small orange dots, indicating problem areas. I tapped on one and saw a fever chart for the reading. These charts default to the current ready, but will also show you yesterday’s activity and a week of air trends. I like that. However, in the mobile app, I could only view one metric at a time. On the Web console, I can overlay up to four. In the app, I saw a spike in the CH2O and VOC readings at 11 AM that day.

An Airthinx company rep who could access my data explained that CH2O was formaldehyde and VOC stands for Volatile Organic Compounds. The former comes from, among other things, adhesives and glues in furniture and the latter is found in cleaning products and sprays. A lightbulb went off in my head.

In preparation for the beach that morning, I’d sprayed myself with sunblock while standing in our shower. I usually do it outside but thought this would be more convenient.

That spray could have caused the temporary spike.

After that incident, I noticed that my air quality remained good. There was the occasional Moderate air quality (AQ) reading for a temperature rise or extremely high humidity, but, overall, my air did not appear to be killing me.

The air here and there

Over the next few weeks, I moved the Airthinx monitor around from room-to-room and floor to floor. The biggest changes I noticed were in the CO2 readings. Carbon dioxide is what humans exhale and when I put the Airthinx in my basement, away from most of our activity, CO2 levels dropped significantly. I could also see them spike when my mother-in-law, brother and nephew visited. More people equals more CO2.

Most studies show that the air in our homes and buildings is bad for us but when I put Airthinx outside, overall air-quality reading quickly dropped to moderate, though this was mostly due to the rise in temperature and humidity. 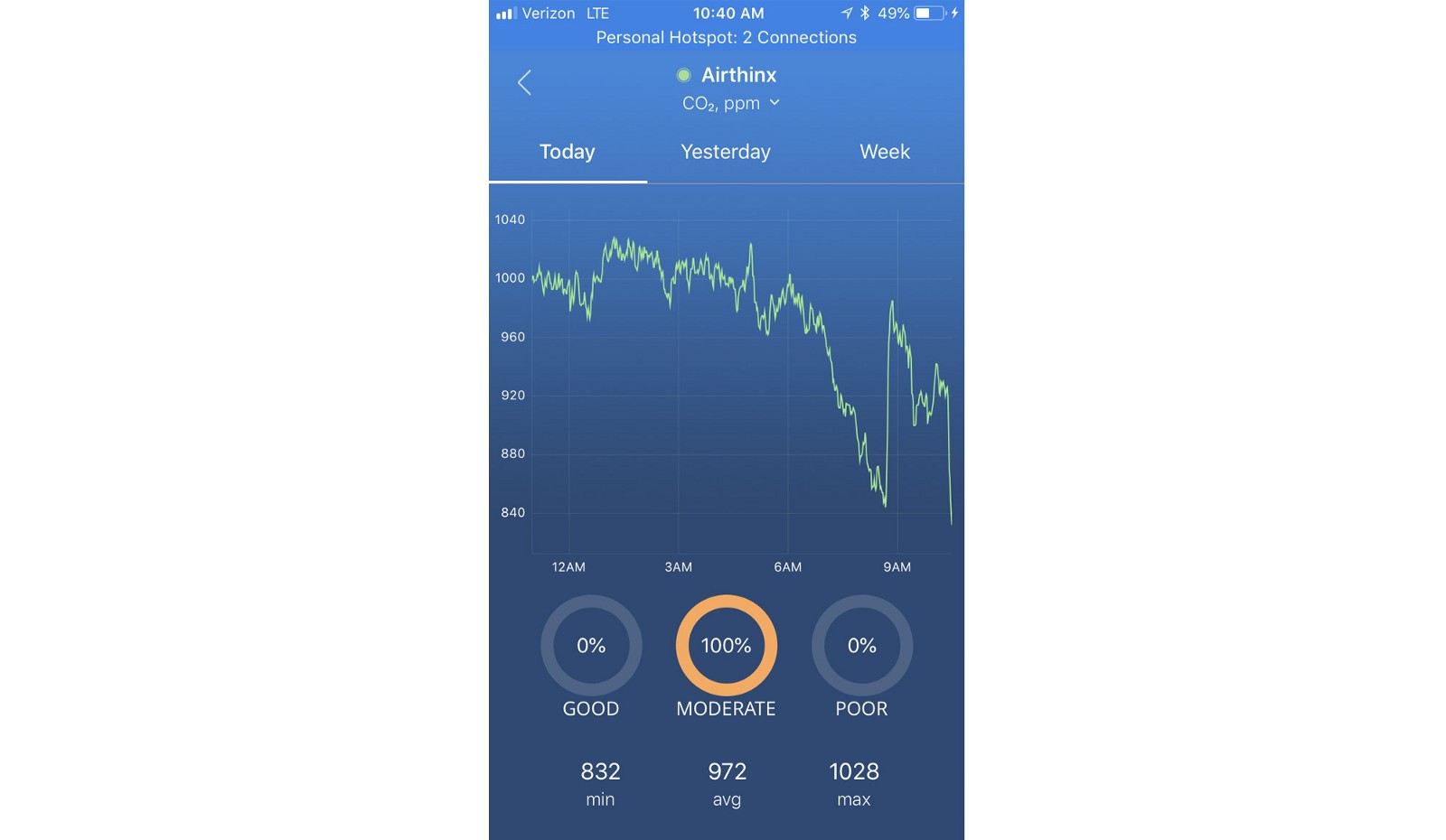 I wondered how my home air quality compared to other users, but even though Airthinx stores all its air quality data in the cloud, it doesn’t offer an anonymized view of other users, locations, or even averages across states. I just want to know if my air is better or worse than everybody else’s.

Airthinx claims that all this data and insight into not just overall air quality, but specific metrics impacting the whole can help me adjust habits to improve my air quality. In some ways, they’re right. I now know that spraying something indoors can have a brief deleterious impact on my AQ.

On the other hand, the app is too confusing and offers little guidance beyond “you’re breathing bad air.” Some consumer-friendly verbiage and a few common-sense tips for each metric would go a long way toward making this a useful home device. 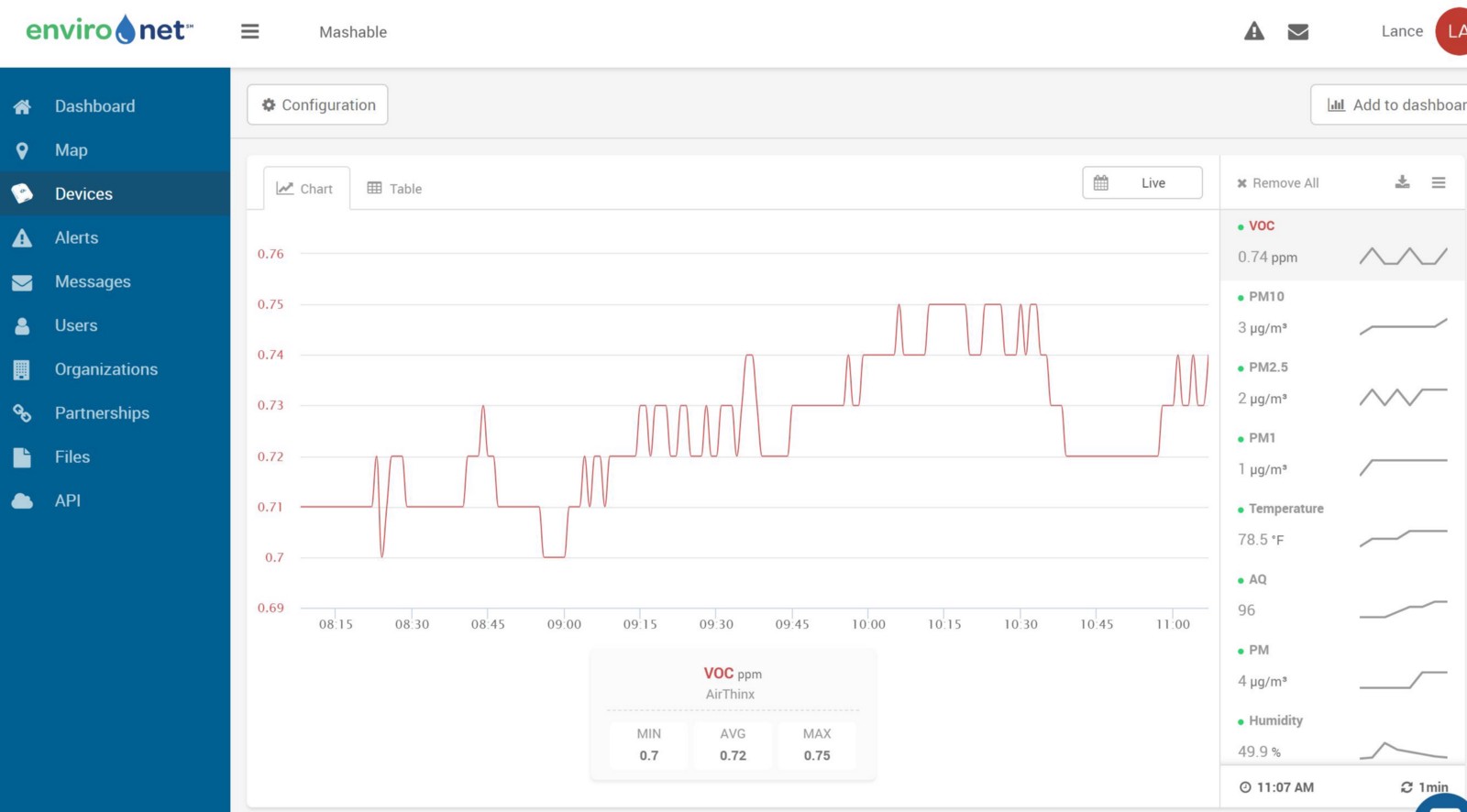 I had some connectivity issues with the T-Mobile network. 30% of the time I tried to check my air quality, the Airthinx was offline. I could change my network settings to Wi-Fi, but I have to do that through the Web interface, which makes no sense to me.

My other concern is the price. This little gadgets costs $699 or $49 a month with a 24-month contract, which is almost $1,200. I get that Airthinx stuffed this device full of sensors and radios, but that is a lot of money for a “Good AQ” reading. If Airthinx improves the software and lowers the price to more consumer friendly-levels ($299 and $12 a month for 24 months), they might have a winner here.

After all, what’s more important than the life-giving air we breathe?