We have a lot of smart home devices today. I have a Nest, an Amazon Echo, a Google Home, garage doors I can control with an app, and multiple other smart home technologies. But can you really call a home smart if it doesn’t know whether or not your most critical environment is safe?

After today, the answer is no. At least for me.

My home furnace was venting exhaust into my house for at least three to five months and I had no clue. Until I started using a home air quality sensor.

About three weeks ago I started testing air quality sensors: one from Airthinx and another from Awair. What they showed me – especially the Airthinx, which I received first – was shocking. Carbon dioxide levels in my house were five times normal levels and regularly safe exposure limits.

Good outdoor air typically has C02 at 250 to 350 parts per million. Over 1,000, people start to complain of drowsiness. At 2,000 to 5,000, symptoms includes headaches, sleepiness, increased heart rate, and slight nausea.

Our levels were hitting 5,000 and plateauing there.

My family had some of those symptoms over the past few months, ever since we had redone the siding on the home. But we didn’t connect the dots, and unbeknownst to us, the workers putting siding on the house had likely impacted the furnace exhaust piping, jostling it enough so that a poorly attached connection to the furnace popped off.

We were literally breathing combustion exhaust.

Only when we knew that the C02 levels were that high, however, did we start to explore why, and learn the cause. What we found ensures that we’ll never live in a house again without internal air quality sensors.

Apparently, indoor air quality can be five to ten times worse than outdoor air, simply because we are enclosing ourselves in ever-more-tightly sealed boxes, and contaminants build up.

“We see this category growing exponentially as people start to become more aware of air quality dangers,” says Vasileios Nasis, CEO of Airthinx parent company Netronix. “We see it becoming the equivalent of a smoke detector … a detector that provides much more valuable information.”

The AirThinx is small, about the volume of an oversized deck of cards. 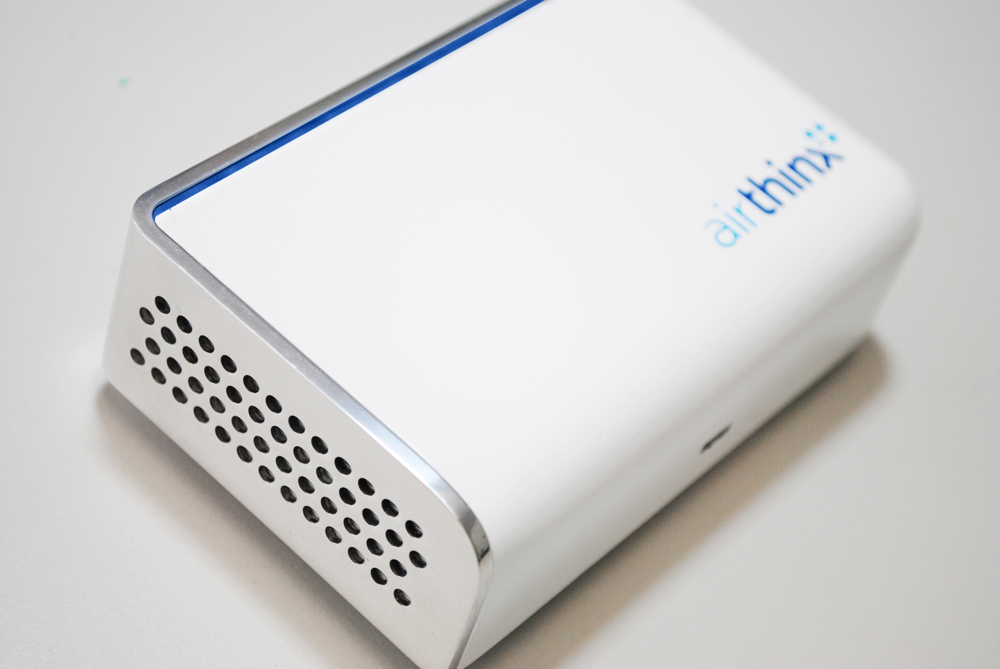 But it will check for four different dangerous components in your air: Co2, formaldehyde, volatile organic compounds (chemicals from cleaning agents or other materials), particulate matter (like smoke from a nearby forest fire) as well as pressure, humidity, and temperature, each of which can affect health and air quality as well. It’s sophisticated, testing for large, medium, and small particulate matter at one, 2.5, and 10 micron sizes.

It then gives you a score on your air quality, which you can see visually on the device by a glowing color strip (blue-good, red-bad), or in more detail in the companion app. You can get even more detail in charts and graphs in the companion website, and there you can tell this is designed for large buildings as well as homes. (Apparently, a major airport in the UK is testing it.)

It’s super-sensitive: my son tested it by breathing directly on it, and the app immediately showed an uptick in CO2 in the room.

In addition, Airthinx can connect with your Nest thermostat and automatically initiate a non-heating ventilation of air, if your furnace supports that function, thereby cycling in fresh air. 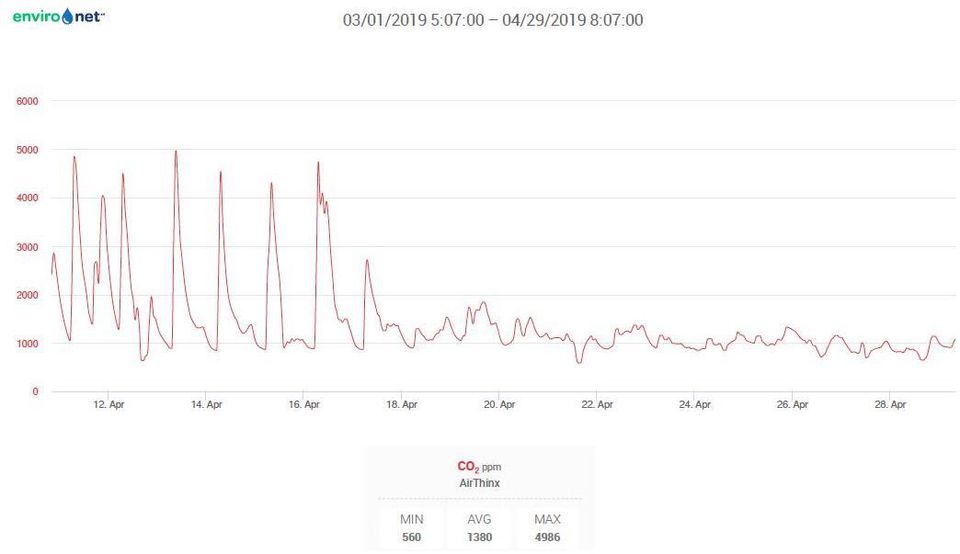 I’ve also been testing the Awair.

Looking something like a small Tivoli radio, Awair tests for CO2, chemicals, and particulate matter, as well as humidity and temperature. The Awair gives a little more detail on the device itself, supplying a zero (very bad) to 100 (very good) air quality score on a cool sort of dot-matrix “display,” plus additional details.

It will also tell you the time, and further detail are in its companion app.

It’s somewhat cheaper, at $179, and a little less technologically sophisticated than the Airthinx. But it provides more immediate insight on “screen,” and looks a little more stylish with your home decor.

Ultimately, knowing what I know now, I wouldn’t live without an air quality sensor.

Air quality testing is now an essential part of the smart home revolution, in my opinion. Without it, you quite literally don’t know what you’re breathing, and you don’t know what risks you’re subjecting yourself and your family to.

The interesting thing is that the furnace is only four years old, and cost us somewhere around $5,000.

But even at that price it was too stupid to tell me it was malfunctioning, and dangerously so.